ECUWEST has acquired a current model bog stock Suzuki GSX-R 1000 as a long term project bike. The GSXR is more onerous to tune than most other bikes due to it having four times the maps to control fuel and spark, then there are 3 power modes too. We want to suss all this out and get the most reliable power we can out of it with stock internals. Follow us as we develop tuning files for it in stock form, with a slip on and hi-flo air filter, then with a full racing exhaust system installed, it’ll no doubt be fun! We’ll also get it down the track to make sure the power is smooth and seamless, with no snatchiness during on/off/on throttle transition. Taking AFR’s close to the cylinder head is essential to getting accurate data about the mixture. Note the exhaust valve – its days are numbered….

Having found the O2 Sensor and Exhaust Valve addresses within the tunefile, we can now disconnect these and remove them without throwing FI codes on the dash. We have also finally located the correct fuel injection and ignition timing maps so we can start tuning this beast. In total there were 96 fuel injection maps and 84 ignition maps to sort through and test until we found the relevant maps that are actually used in this bike. Next will be tuning the bike in stock form mechanically. As seen below initial tuning testing has netted some solid gains with the restrictive CAT and Stock exhaust arrangement in place. 5hp at the rear is more than it sounds when ridden on the road. We have also turned the fuel cut off which smooths out the on/off/on throttle transition. Opening the secondary throttle plates more also adds more power up top and around the 7000 RPM mark – This can be considered a Stage 1 Tune 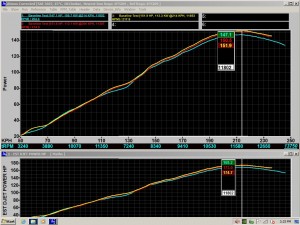 As can be seen in the graph below the Stage 2 Kit bumps power up to 154.2hp 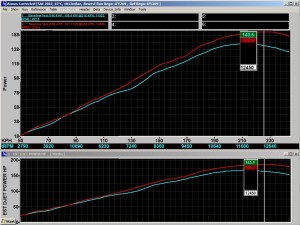 162.4HP (Or 186.7 DynoJet HP) for the finished product. Thats nearly a 20HP gain at the rear wheel and 4hp more than a current model Ducati Panigale with Full Termignoni System (Stock Tuning) – Pretty impressive for this affordable rocket.